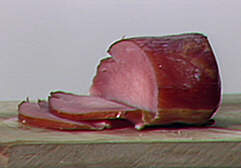 Ham is one of the easiest of preserved meats to make.

There are as many ways to make ham as there are people who make it but I will present what seems to me the easiest and most foolproof method to produce ham at home.

Ham is made by soaking a piece of pork in a salt brine for a period of time depending on it's weight and then cooking and/or smoking it. Depending on the process, it can be ready to eat or cured for months and cooked as eaten or various combinations in between. The process I will describe is commonly known as "boiled ham" in spite of the fact that it is never boiled. I will also show a variation on the theme to produce a great smoked ham for folks with the equipment for smoking.

Ham is made from pork and just about any piece of pork will produce what tastes more or less like ham.

Traditionally, ham is made from the upper portion of the hindlegs which weigh from 15 to 25 lbs. This is not easy to deal with in the kitchen and I have never made a whole ham for this reason.

I have found the most practical piece of meat for home made ham to be portions of the loin. This is the stuff of rolled roasts and if you can't find loin, just buy a rolled roast, untie it and use the two pieces to make two hams. I can get my butcher to cut it to any size I want and usually get a six lb piece and cut it in half to make two 3 lb hams.

The experts insist that the meat for ham must not have been frozen and I have no reason to try to prove them wrong. Freezing modifies the cell structure in such a way that it will not absorb the brine properly.

The meat must be made to take up salt, spices and a cure to provide the characteristics we call ham. Many folks use a dry rubbing method but I find the liquid brine far simpler to deal with and that is what I will describe here.

In addition to the salt, sugar and spices, the brine contains what is known as a cure. Many old timers do not use this but I do not consider it an option, if for no other reason than the fact that gray ham is not very appetizing. The cure is what gives ham it's pleasing pink color in addition to protection from botulism and other pathogenic organisms.

If you are new to cures, please read that section of my SAUSAGE PAGE

The brine is mixed in a plastic or stainless bucket large enough to hold the brine and meat. The following one gallon batch will do about 10 lbs of meat.

The brine should be cooled to around 40F before the meat is placed in it. It should also be kept near that temperature during the brining period so that is another reason to make small hams.... you can find space in the fridge. Do not let it get below about 38F though because the cure ceases to function around there. Monitor the brine temp with a thermometer and just remove it for a while if it gets too cold.

The brining time is mainly a question of personal taste. The longer it stays in the brine, the saltier it gets. I find 4 days about right for a 3-5 lb piece of loin. You can speed things up by pumping brine into the meat with a syrenge but that is probably overkill for small pieces.

For a garden variety "boiled ham", the meat is removed from the brine, rinsed off and placed in water at 170F. It is held there until the internal temperature reaches 155F on a meat thermometer. This will take about an hour for a 3 lb piece.

After cooking, the ham is chilled in cold water for about 30 minutes and then put in the fridge overnight. Next day you will think you just returned from the deli.

If you have a smoker, there are may options here. If you just want a little smokey flavor, you can smoke it either before or after cooking, for about 5 hours. Smoking before cooking will produce a moister, less salty ham.

If you want a ham more like "country cured", smoke it for 24 hrs @ 130F. Then slice a piece and fry it and you will think you died and went to heaven. Make sure it is fully cooked when you fry it as it has not yet been cooked. You can also cook it in the smoker to an internal temp of 155F but it will be even dryer and harder.

All of these hams must be kept in the fridge and treated like you would any cooked ham. They will keep for a few weeks... not months or years like "country cured" hams.

They can of course be frozen but that presents other problems. Freezing breaks down cell structure and thawing causes great loss of moisture. However, if you are going to fry it up with eggs, it won't make much difference. I like to take a finished ham and run the whole thing through the meat slicer and freeze in serving portions. They are the perfect size for Egg Von Schmidlings. In fact, when you make ham out of loin, it is commonly known as Canadian bacon.